Royal Ascot is well-known for its top-class racing, food, drink and fashion but this year it may just have added another outstanding field – top class entertainment! Racegoers were treated to some of the very best bands, musicians and DJ’s at this year’s meeting – supplied of course by R&R.

As guests began their day poring over the race cards and enjoying a cheeky late-morning cocktail, the party has already started as DJ’s all over the site were spinning tunes and getting everyone in the mood for a great time.

DJ Simon Jinadu rocked the Lawn Club and got everyone on the dancefloor – even the staff had a boogie and a whale of a time – there’s no doubt he absolutely smashed it! MTV’S DJ Becca D also performed for the guests in the village upon the very popular bullet stage.

House of Angels made an appearance dressed in their absolute best to perform in the Villier’s Club alongside DJ Keelan. Their classy look and incredible music had the guests thoroughly entertained as they sipped champagne and delved into the delicious offerings of the club.

The Village was set up with multiple bars, stages and catering including the bullet stage, band stand and a festival-esque main stage! Guests took in the sights of the huge enclosure and wondered what delights they could be in for – and they were not disappointed!

The phenomenal Choon Chaps performed several sets over the week on the Village bandstand, surrounded by a crowd of guests eager to dance to the bands unique covers from Elvis Presley to the more modern Bruno Mars. Everyone was on their feet and dancing as they enjoyed the beautiful harmonies and clear, clean sound of the Choon Chaps. 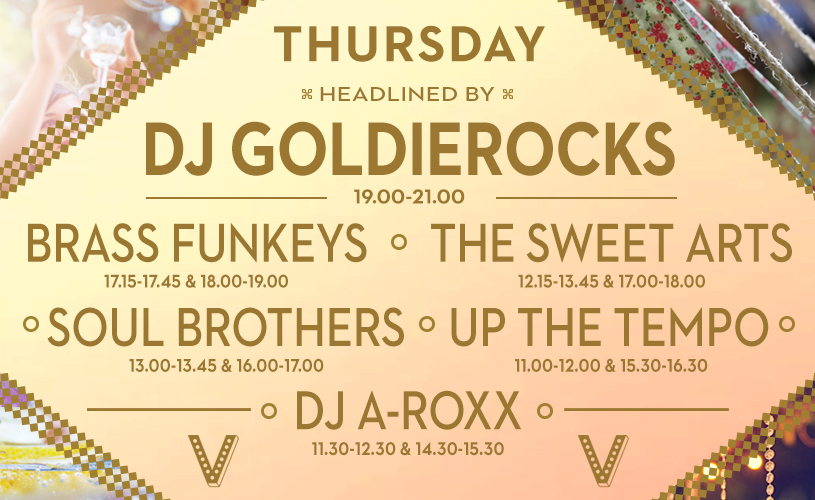 Guests were also treated to a set from the Soul Brothers on the Village Main stage and DJ Lora who led the after-party in the Queen Anne enclosure.

After the racing finished it was time to pump up the volume and celebrate the end of a successful weekend! Even the rain could not stop the crowd as they donned plastic ponchos and the more prepared even popped up a few umbrellas while they rocked out to the mighty Supergroup’s headline set. The music was sublime and the atmosphere was infectious! Even the hard-working policemen overseeing the crowd couldn’t help but join in the fun! As the sun set and the evening drew towards a close, the crowd roared for more and it became quite clear that this year – they had picked a winner.