Last Monday we had a really interesting event – a corporate festival for a fantastic (and top secret) client!

The day started bright and early at in a secret location in Hertfordshire with The Rise playing guitar – on a tractor – to welcome delegates arriving in all manner of fancy dress. Once they’d negotiated their way through the woods, then were then greeted by the fantastic Diamond Boys at the entrance to the festival. The comedy security guards were on hand to point out what looked like “dodgy briefcases” and to ask a man, dressed as a clown, why he hadn’t come in fancy dress!

The Diamond Boys then took to the main tent to entertain 2000 + delegates preparing for a health and safety briefing. “Alan?” they called across the space, “Alan, Al!, Al, Alan?!” until someone pointed out a poor chap (let’s call him a victim) who they then serenaded with a superb rendition of Call Me Al.

As the day went on we had performances from The Rise, The Duplettes and Jo & Jess on the main stage in the festival tent, and sets from the Diamond Boys on the outdoor stage. The grounds were covered in Pimm’s double decker buses, an old fashioned ice cream van, bunting – and there was even a campsite for 500 people AND an area for games – it looked like wacky races to us!

Finally 9.45pm rolled around and the RPJ Band hit the main stage for their set – everyone was rocking after a long and hot day of fun… But the fun didn’t end here, we then had The Duplettes and The Rise finish the day in a chill tent. When 1.30am arrived, the plug was pulled but the delegates wanted to carry on, so The Rise sat with them for a real campsite feel performance!! 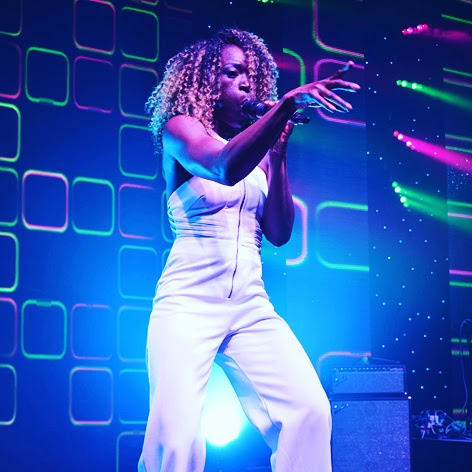 CORPORATE EVENT OR FULL BLOWN CONCERT? ….LET'S HAVE BOTH!

Oasish, High On Heels and the RPJ Band ‘Smash it’ in Telford! Upon a Tuesday evening… Rubbing shoulders with British aristocracy and the upper echelons of society, including our much loved Queen…